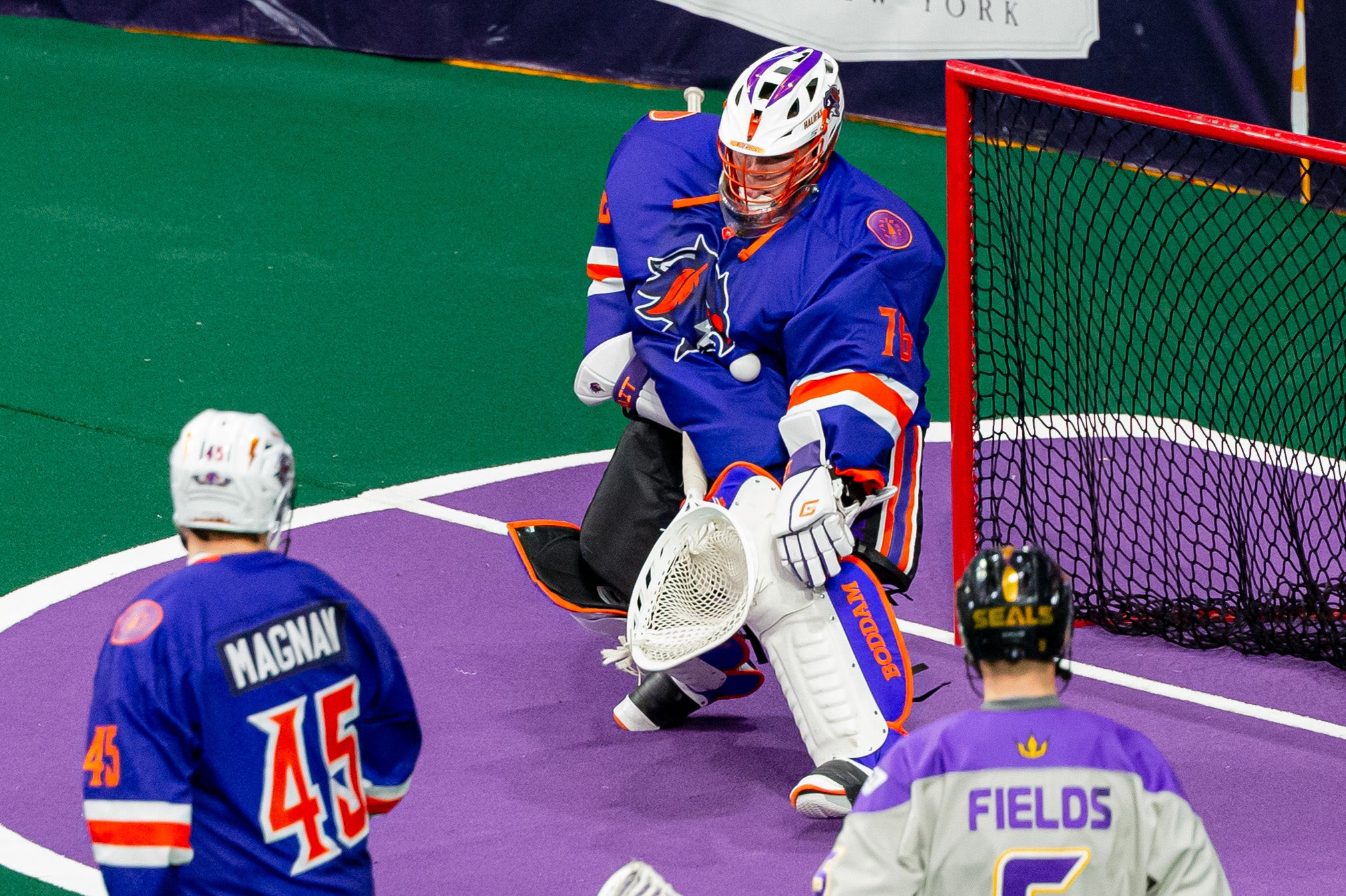 The Halifax Thunderbirds faced one of their toughest tests this season against a hungry San Diego Seals team. In a low scoring affair, the Thunderbirds found a way to win, knocking off the Seals 8–5.

At the beginning of the game, the keys for the Thunderbirds were to avoid the trap game. Facing a Seals team that has started the season 1–4 and hungry for a statement win, Halifax couldn’t take this opponent lightly even though they have won only one game so far. It was a slow start for the Thunderbirds, possibly thinking that the Seals would be an easy opponent to roll over, which was certainly not the case.

After a highlight reel diving goal by Kyle Jackson to open the scoring and a second goal a few minutes later by Ryan Benesch, the Seals began to fight for their lives. Zach Greer scooped up a rebound and put the Seals on the board. A penalty on the Thunderbirds gave the dangerous Connor Fields too much time and room, and he evened the score at 2 in the 1st quarter.

“We just have to stick to our game plan,” said Thunderbirds Assistant Coach Chad Culp. “Everyone just needs to keep working for each other.”

The rest of the game would be defined by outstanding defense and even better goaltending for both teams. In the 1st quarter, Warren Hill had already recorded 15 saves. Defenseman Luc Magnan even had a save for the Thunderbirds, jumping in front of a shot to help his goaltender.

Rookie Nonkon Thompson took his second penalty for the Thunderbirds in the 2nd quarter, but Mike Burke decided he didn’t need to have everyone on the field to score, notching a shorthanded goal and retaking the lead, 3–2.

The Seals weren’t going anywhere, however, and after a few big saves by Warren Hill, Zach Greer tallied his second goal of the game after fighting to regain possession and taking the ball to the net. A third penalty by Thompson gave the Seals another opportunity to take the lead but Warren Hill and the rest of the Halifax defense stood tall.

On the other side of the field, the offense was having trouble getting going. With some solid opportunities, the Seals defense kept finding ways to subdue the Thunderbirds attacks. Frank Scigliano in goal for San Diego was a brick wall, letting only 3 goals past him in the first half, keeping the game tied and well within reach.

“We just have to keep playing our game,” said defender Luc Magnan going into halftime. “Warren [Hill] is our backbone and we have to help him out more on offense.” After facing 35 shots in the first half there were certainly some defensive adjustments that needed to be made. “We have to box out more and stay honest with them. They have a lot of firepower and can score all over.”

To kick off the 2nd half, Warren Hill kept locking down the defense, making a few quick saves and shutting down the San Diego offense. Still the Seals kept battling and 3 minutes into the half, Jeremy Noble ran through the Halifax defense and snuck one past Hill, giving San Diego the lead 4–3.

Wes Berg got called for an illegal body check and gave the Thunderbirds a Power Play chance with 3 and a half minutes remaining in the 3rd quarter. Mike Burke finally broke the scoring drought for Halifax, tying the game back at 4. The 3rd quarter was a strong defensive battle, with each team only letting one goal in, and tensions were beginning to rise.

A big hit by Scott Campbell started a scrap between the teams, and Nonkon Thompson and Jeremy Noble came to the defense of their teammates. Both players got sent to the penalty box and the game resumed 5 vs. 5 as the 3rd quarter concluded.

As the 4th quarter began, the tensions between the teams heightened even more. Warren Hill began the quarter with some big saves for the Thunderbirds, but 45 seconds in, a turnover by the offense allowed Zach Greer to collect his 3rd goal of the game for the Seals and reclaim the lead.

After that goal, neither teams’ defense seemed like they were going to give an inch, until Kyle Jackson, who had struggled scoring in the other games this season netted his 2nd of the night and tied the game at 5. That ignited the Nest, and with the crowd behind them, the scoring opened up for the Thunderbirds.

Stephen Keogh, who had many opportunities that just wouldn’t fall throughout the game, retook the lead for Halifax with 5:31 left on the clock. And he wasn’t done. After more saves by Warren Hill on the other end of the field, Keogh put another goal in to stretch the lead to 2 with an assist from Cody Jamieson. Right after that, Keogh added his 3rd goal of the quarter, building the lead to what would be the final score, 8–5.

Scott Campbell and Brodie Merrill dropped the gloves as the Seals tried to find a spark, but it was too little too late. Keogh’s goals had sealed the game for the Thunderbirds as they improved to 5–0 to open their inaugural season.

“It was an offense by committee. Everyone moving their feet, moving the ball, and cutting really opened it up,” said Keogh post-game. “Jammer [Cody Jamieson] is one of the best passers in the game and he was finding me. It felt good to get the ball in the back of the net.”

The Thunderbirds extended their win streak to 5, and are still undefeated after tonight. San Diego gave them a great test tonight and played a near perfect defensive game for 55 minutes.

“We know that with our start we have a target on our backs and are going to get every teams best game. They pushed us to our limit tonight. Obviously, their record isn’t where they want it to be so they’re treating every game like it’s a playoff game,” said Warren Hill. “My defense put me in a great position to make the saves tonight, giving me the looks that I wanted to see.”

The Thunderbirds play again next week when they travel to Calgary to square off with the reigning NLL champions. After getting off to the best start in the NLL since 2004, Halifax will face their toughest challenge yet. The Roughnecks have had a tough start to the season, currently sitting at 2-3. They will certainly come out strong, seeking to hand the league leading Thunderbirds their first loss.

The next home game for Halifax is February 15th when the Saskatchewan Rush come to the Nest.