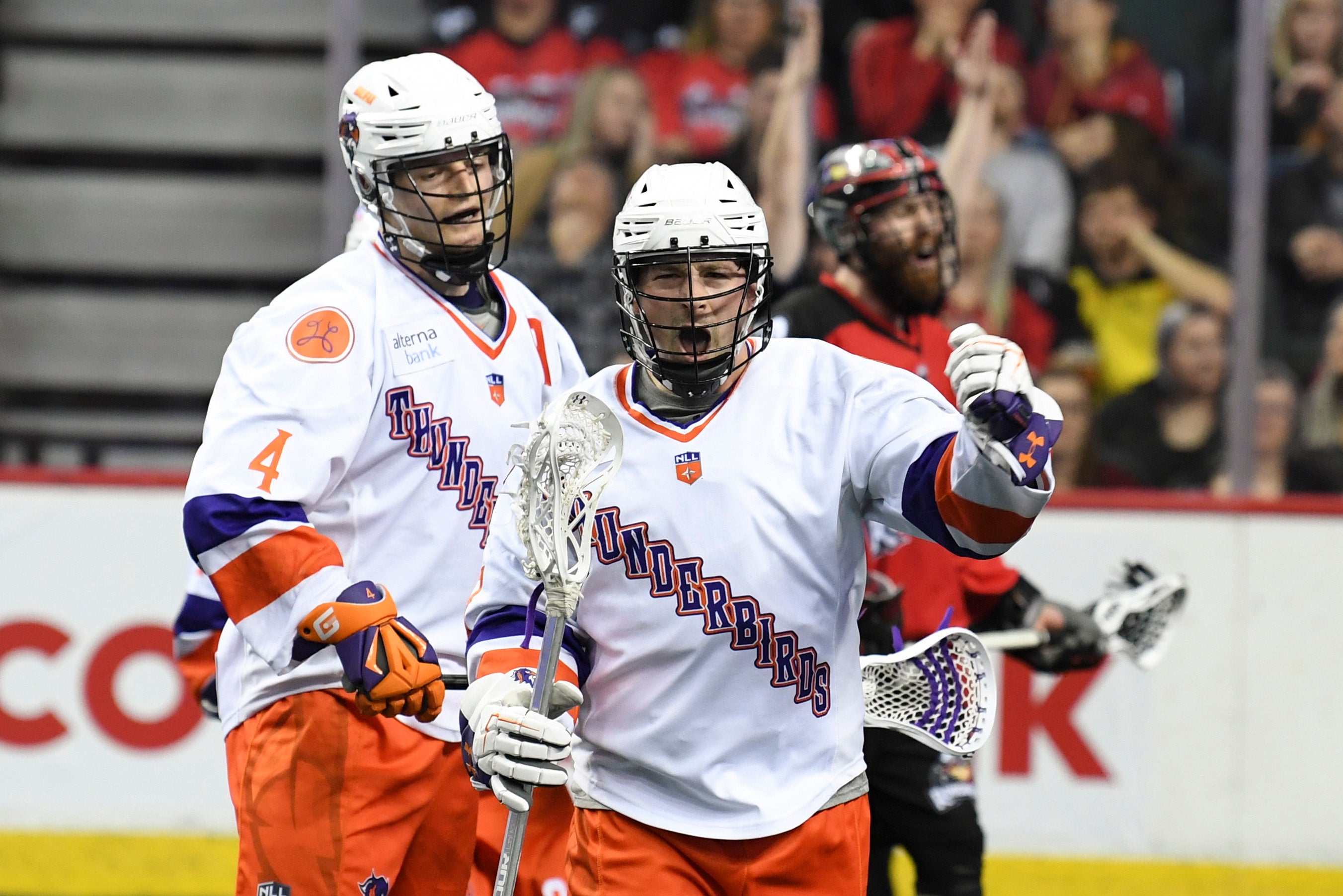 The Thunderbirds second half surge helped them take down Calgary 15-12 in front of their home crowd.  After trailing at half, the ‘Birds scored 9 goals in the third quarter.

Calgary got off to a quick start scoring the first three goals of the game. Brad Gillies was called for a penalty and the Roughnecks capitalized on their first power play of the game. Curtis Dickson’s shot redirected in front, beating Warren Hill over his left shoulder.

Stephen Keogh showed his range and got the ‘Birds on the board with 6:15 left in the first quarter. James Barclay picked off a pass and took it coast to coast for his first goal of the season.  Dickson answers with two of his own extending the Roughnecks lead.

The Thunderbirds found themselves in a little bit of a hole trailing 6-3 at the half.

“It is all about composure,” said Head Coach Mike Accursi. “We needed to try and match their intensity, and we didn’t in the first half.”

Halifax came out of the locker room with urgency. The ‘Birds scored the first four goals of the second half to knot the game up at 6. Cody Jamieson lead the charge with three of the four goals to start the third quarter.

The Thunderbirds weren’t going anywhere, they score seven straight, to take a 13-8 lead.

“Offensively we started to move our feet and move the ball,” said Keogh.  “We started taking smart shots and they started dropping for us.”

“It’s just offence by committee and everybody is just working for each other,” said Keogh. “We’re good when we are cutting through the middle and just opening up space for everybody.”

Jake Withers dominated Tyler Burton at the X going 27-32.  Scott Campbell collected 10 loose balls as his defensive unit continued to shine on the back end once again. Warren Hill found his grove in the net stopping 32 shots. While the result isn’t what the Roughnecks wanted, their goalie Christian Del Bianco recorded 49 saves.

The Thunderbirds improved to 6-0 and continue to sit at the top of the North Division.

“There was no panic in this group, we knew we had the guys in the locker room to make a big comeback in the second half,” said Jake Withers.

Halifax will travel to the Scotiabank Arena this Friday night as they take on North Division rival the Toronto Rock. The Rock will be coming off a bye week after dropping a close one to Buffalo the week before.

The Thunderbirds return home on February 15th to take on the Saskatchewan Rush at 7PM at the Scotiabank Centre.