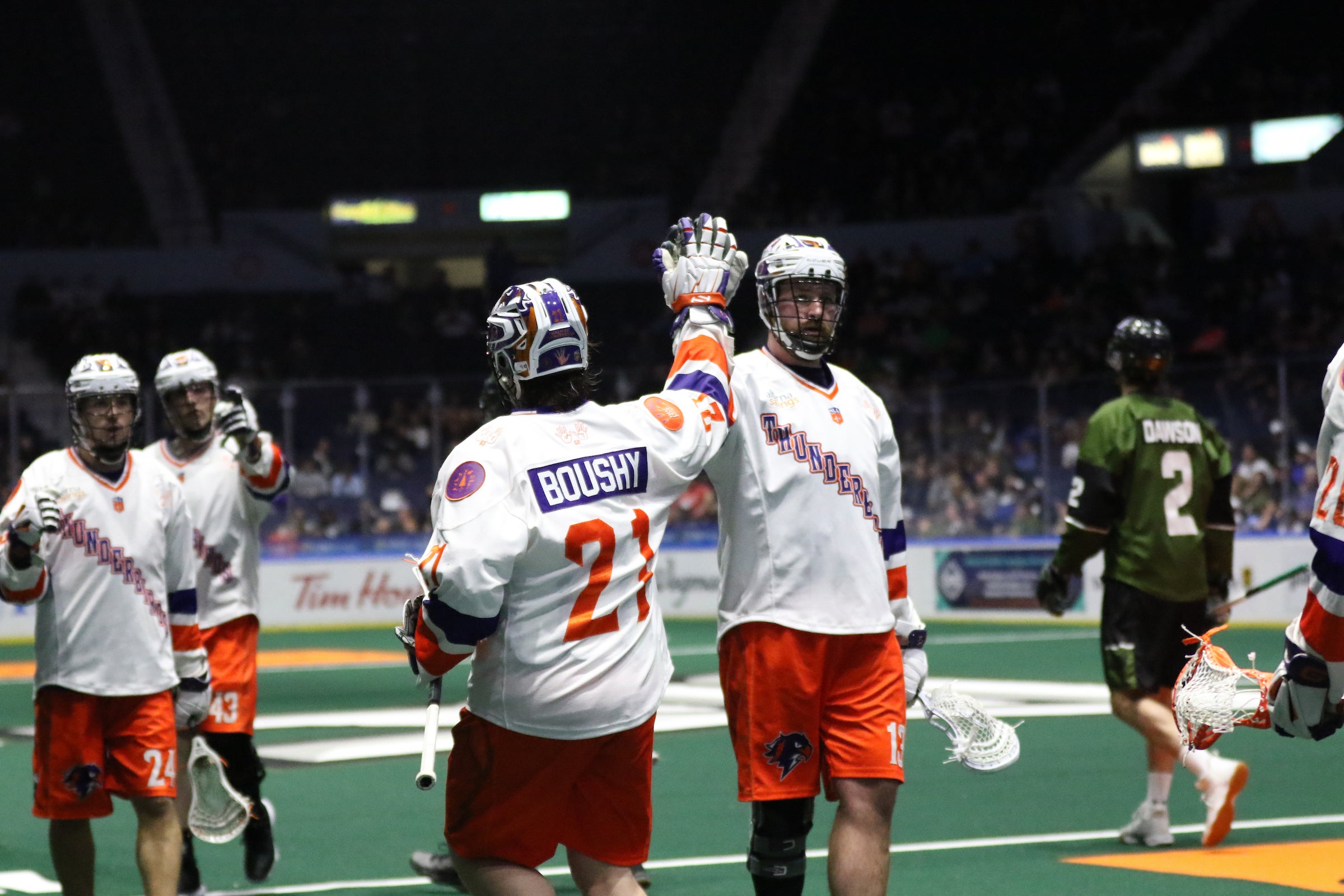 The Halifax Thunderbirds (11-7) ended the regular season with a 13-10 win against the Rochester Knighthawks (4-14) at Blue Cross Arena.

Down 10-7 entering the final 15 minutes of the regular season, the Thunderbirds exploded for a six-goal fourth quarter that catapulted them to victory and cemented their spot as the third seed in the first round of the NLL playoffs.

Jared Conners opened up the scoring with the first goal of his NLL career. Ryland Rees followed his teammate’s example with another goal on the fast break, and the home team was quickly up 2-0. Brandon Robinson bookended a goal from Curtis Knight, and the Thunderbirds were down 3-2.

Back-to-back goals from the Knighthawks widened their lead by three goals, but Stephen Keogh and Austin Shanks responded each in the final two minutes to cut the deficit to just one goal, 5-4.

Two more Knighthawks goals opened the second quarter, putting the Thunderbirds back down by three goals. Robinson completed his hat trick, hammering it five-hole, and a pair of goals from Chris Boushy knotted the game up at seven apiece.

The fourth quarter was a night and day difference compared to the third for the Thunderbirds. Clarke Petterson kicked off the scoring, followed seven second later by Cody Jamieson scoring off the Thunderbirds face-off win. He followed up his first goal with his second 31 seconds later, tying the game up at 10.

Boushy's hat trick stung the farside top corner, giving the Thunderbirds their first lead of the night. A long marker from Eric Fannell widened the lead further, and Colton Armstrong slammed his transition goal home just as the goalie ran back between the pipes, sending the ball and goalie into the twine. The comeback was complete, with the Thunderbirds winning 13-10.

Fannell's six points (1G, 5A) led the Thunderbirds in scoring, followed by Shanks with five points (1G, 4A) and Petterson with four points (1G, 3A). Warren Hill weathered the early Knighthawks storm and played solidly the rest of the way, making 37 saves for a .787 Sv%.

For the Knighthawks, rookie Charlie Bertrand led the home team in scoring with five points (1G, 4A). Knight and Thomas Hoggarth both finished with four points (2G, 2A) the same way. Joel Watson earned the loss after making 45 saves in 59:34 min., finishing with a 12.09 GAA and .789 Sv%.

The postseason is now here for the Thunderbirds. As the third seed in the Eastern Conference, they will travel to FirstOntario Centre to take on the Toronto Rock (13-5) on Friday, May 6.