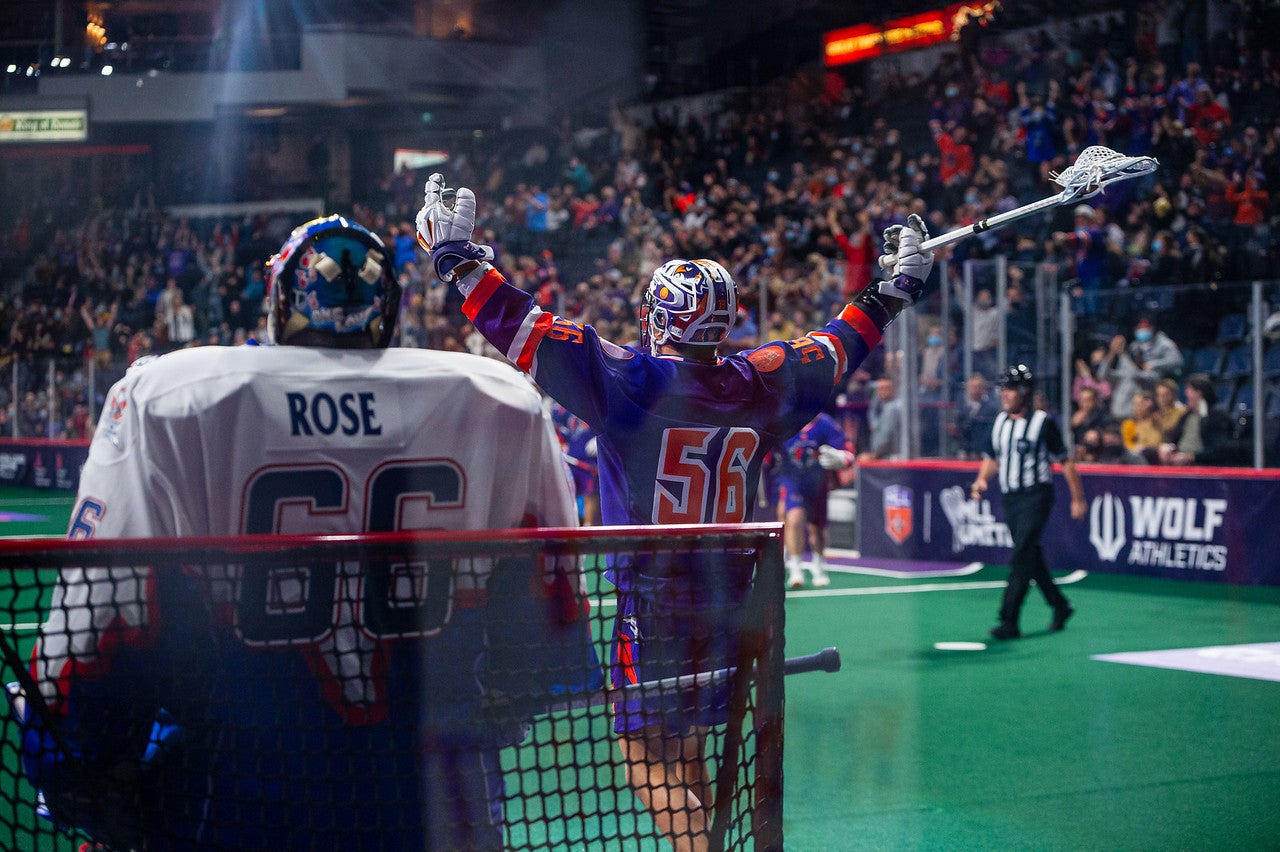 The Halifax Thunderbirds (2-0) were able to jump out to a big lead and hold onto it on Friday night, beating the rival Toronto Rock (1-1) 11-7 at Scotiabank Centre.

Clarke Petterson continued his strong offensive play, posting five first-half goals and finishing with six tallies and an assist for the night. Chris Boushy (3G, 4A) also had a huge game, while Stephen Keogh (1G, 3A) and Kyle Jackson (3A) also had good offensive showings.

Thunderbirds goaltender Warren Hill had an outstanding night in the cage, stopping 45 shots while nabbing his second win of the campaign in the process.

Tom Schreiber led the way for the visitors, and Nick Rose came up with 31 saves in a losing effort.

The game started off as a defensive battle, with the Thunderbirds being the only team to find the board in the opening frame. Petterson scored the pair, with the second marker coming with just a second left on the clock.

The Thunderbirds maintained their strong play in the second, scoring four times. Petterson blew a shot past Rose to finish up the natural hat trick before Boushy was able to finish off a beautiful passing play by Jackson and Stephan Leblanc. Petterson finished off his wild half with a pair of highlight-reel goals. He ducked underneath Mitch De Snoo and drove the cage for a diving finish on Rose and followed that up with a dunk goal from behind the net.

“Some days it’s me, some days it’s Keogh, some days it’s Kyle (Jackson). Our offence just works like that where we’re all working hard,” Petterson said of his big night. “The lefties were drawing a lot of attention off-ball tonight, and that let me free up some space and free up my hands. The shots were falling, so I felt good about that. Sometimes they go in, and sometimes they’re not. Tonight, they were, so everything worked out.”

Dan Craig had the lone goal for the Rock in the half, and Halifax went into the locker room with a 6-1 advantage.

Boushy and Schreiber each had a pair of goals in the third quarter, with the former scoring a shorthanded goal before the latter converted on the power play chance just seconds after. Halifax was able to maintain its five-goal advantage.

Petterson got the sock trick to open the fourth, but after that, the Rock started to chip away at the deficit. Rob Hellyer scored 4:42 min. into the quarter, and he was followed shortly after by Latrell Harris, who finished off a quick strike chance in transition. Schreiber capped off his night with two more goals for the Rock – his fourth of the game came off a full-floor stretch pass from Rose. However, that’s as close as Toronto would come.

Keogh was able to bury a shot over Rose’s shoulder on the power play to make it a 10-7 game. Then, Nonkon Thompson – who played offence in this contest – notched his first career goal on a beautiful diving effort to put the final nail in the coffin.

The Halifax offensive depth was tested once again in this contest, as Rhys Duch went down early in the contest with an injury. With the team already without both captain Cody Jamieson and Austin Shanks, it was next man up again, and the remaining forwards were up for the challenge.

“Clarkey was outstanding tonight. He accounted for more than half our goals tonight, and he just keeps getting better and better,” Thunderbirds head coach Mike Accursi said post-game. “He’s stepped up when we’re missing guys like Cody and Rhys, and he’s just been outstanding. I couldn’t ask for any more from that kid. Boushy played awesome and was able to score on his opportunities. That’s all we can ask.”

Jake Withers also continued his strong play in his own end and at the stripe. He finished the game with 11 loose balls and a pair of caused turnovers while going 17-for-21 on draws against the Rock.

He now boasts 30 loosies, four CTOs, and a 75% face-off win percentage, along with a goal in transition.

But it was the play of Hill that made the difference for the Birds in this contest. He made a number of big saves in key moments of the game to keep Toronto at bay.

“My defence played outstanding tonight, and all the credit goes to them tonight,” Hill said. “It’s cliche but they gave me all of the shots that I wanted to see – low-percentage shots. As much as it said on the stats sheet of the saves I made, it’s all them as well.”

Heading into the holidays, the Thunderbirds sit atop the East Division standings. They’ll head on the road for the first time this season to take on the Calgary Roughnecks on Dec. 30 before returning to The Nest on Jan. 8 to take on the New York Riptide.

Fans can secure season tickets to watch the return of championship-calibre professional lacrosse in Halifax by visiting https://ticketatlantic.co/thunderbirds or by calling or texting 902-334-2333.